Before this current blog, I worked on and have in some way been involved in other websites and blogs that are preserved here as historical documents.

In the 1990s the original hasslberger.com site started as a collection of articles on Physics, Economy and New Energy Technologies. They had been written for print magazines or presented at one or another alternative physics conference.
Some of those articles have Italian and German language translations. Here’s a link to the site:

La Leva di Archimede, an Association for Freedom of Choice. I founded this group together with some friends in Rome, with the aim of protecting natural health choices. The original website goes from the turn of the millennium into the early 2000’s

In 2003 I started blogging. The site was called “Health Supreme” and as the name says, the blog’s main theme is health, although other things such as economy and even physics found a temporary home there.

Health Supreme was part of a group of sites hosted by Robin Good of Masternewmedia fame. Other blogs in this group of sites that dealt with freedom of choice in health were Chris Gupta’s “Share the Wealth”

In 2006 I separated Energy, Physics and Technology related articles from Health Supreme. Those themes found space in a dedicated blog on Physics, Economy and New Energy. This blog went on for about 10 years. Some interesting discussions developed on it, particularly  in the Physics area. Work on this blog came to a halt after some software trouble prevented me from posting … the site is still available, but it is no longer updated.

One important development during this time was the re-emergence of cannabis (hemp) from a long period of prohibition and bedevilment. My wife of many years, Susan, was selling hemp-made products in her shop “La Strega” in Rome, and she started a website

Susan also had an anti-prohibition blog which was aptly named Hell… you’ll find there, among other things, an interesting article about Sir Richard Doll, a well paid consultant of chemical industry giants who “scientifically” established that all the damage to our respiratory system isn’t done by chemicals but by … smoking.

Quinta da Susy, our place on Terceira island. It started out as a ruin with old orchards, fixed up to have a place to come on holidays on this wonderful island in the middle of the Atlantic Ocean. Slowly it turned into a place with more space for family and friends to come visit and stay here, each new house coming with its own garden/orchard plots. Now Quinta da Susy is available on AirBnb for rent, and it still occasionally serves as a place for family and friends to come and visit.

Here is a site Susan made about Terceira and our place… 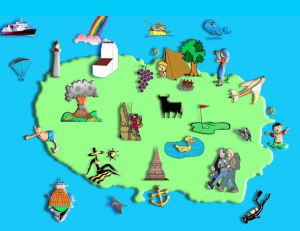 To find the rentable part of Quinta da Susy, search us on AirBnb or see our site http://quintadasusy.com

This listing wouldn’t be complete if I did not mention that during all those years, the bills were paid by a commercial activity called “La Strega”. It is a company that imports and distributes natural vitamin supplements and other health products in Italy. Susan in fact was the first to open a real health food store in Rome. I soon joined the effort and together, we built a company that profoundly influenced the natural health landscape in Italy, and perhaps in all of Europe. You can go see La Strega’s website here: