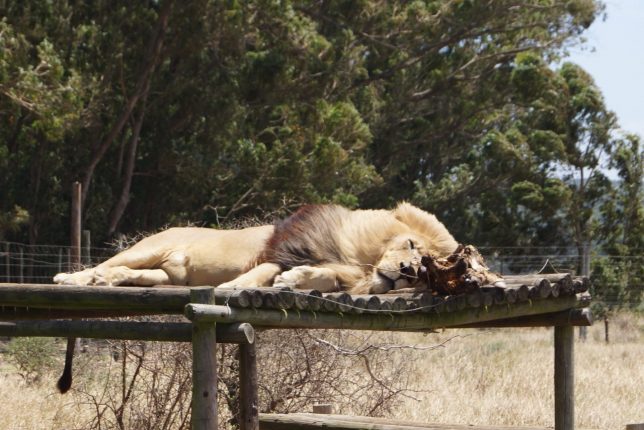 We pride ourselves to be at the top of the food chain … but are we really?

In the animal world, we have the lion who knows he’s the strongest predator and has no equal. Yet, humans hunt the lion with spears, traps and now with guns. We can kill the lion or catch him at our pleasure. In the seas, no fish is more voracious than the shark. Sharks know they are at the top of their food chain. Yet we catch the shark with bait and hook and kill him. Many a shark is caught only to be mutilated. Humans – if we can call them that – cut off the shark’s fins and throw the still living creature back into the sea to die a painful death. The fins are dried and sold for good price as a delicacy.

So humans, we think, must be the most powerful creatures in the world. Even the scriptures tell us that the world is ours to inhabit and control. It is true … if we only look at the physical, the world of animals that surrounds us, we’re hot shit, we’re really in control. But as soon as we consider the spiritual, the picture changes.

In the world of the spirit, we humans are mere babies. We even refuse, for the most part, to consider what may be happening in the spirit world, or even to acknowledge that there is such a thing. Just like humans are outside the conscious world of the lion and the shark, what happens in the world of the spirit is outside our conscious knowledge. Of course that is speaking of run-of-the-mill humans here, not of the few who are spiritually awake and aware. Even our science – physics – steadfastly refuses to consider anything that is not “tangible” or “measurable”, and so we have, as a culture, no real knowledge of the spiritual environment we exist in. Religion, which professes to deal with the world of the spirit, is no better. We’re told to ‘believe’, to follow the expert, the priest, but never to explore for ourselves and to increase our knowledge and experience or to develop our mental/spiritual abilities.

But let’s get back to the food chain. Who or what could “eat” humans?

We should consider that in the spirit world, the currency is not meat but energy. We humans are producers of some of the most delicious kinds of energy around, strong energies that come with our emotions, especially the more nasty emotions like fear (terror), desperation and pain. The energies produced when we experience these emotions are apparently very stimulating food for some predatory species in the spirit world.

We live in what is generally called a 3D world, a very dense kind of reality, where matter is really solid and persistent. Other realities are apparently less dense, of a different, higher frequency. They can exist in the same space as this one, but are separated from our world by an invisible barrier. This is a barrier that is merely perceptual, meaning it exists only for us who cannot perceive those higher frequency ’dimensions’ or realms.

Humans are stuck in this reality, and we generally are blissfully unaware of what is going on around us, even if that stuff determines our lives. With the help of certain drugs we might catch glimpses of those other realities, but more often than not, we cannot bring them back and make others understand what it is like out there.

We farm animals for their meat. Treat them badly, too. Well, in a very similar manner there are some species “out there” that farm us humans for our emotional energies. They enlist the cooperation, voluntary or forced, of some of us to make sure we keep producing those emotions. Be that as it may, the emotional harvesting only can function as long as we are unaware of what’s happening, and as long as our lives are full of stress, full of disaster, full of illness and terror.

Since the most delicious energies seem to come from the most terrible (for us) emotional experiences, we are being served a reality that will stir exactly those emotions.

Robert Monroe – I highly recommend his books to get an idea of what other realities may be out there – calls those emotional energies we are induced to produce “loosh”. He says that our loosh is being harvested and consumed. I would add that probably it is worked into all kinds of delicious dishes… Look for Monroe’s “Far Journeys” to start with. There is also another one of his books called “Ultimate Journey”. Those books are like a travel diary into the world of dreams and the spirit. They do make for interesting reading.

This harvesting has been going on for a long time. Some people got a whiff of it and they were researching and teaching in the Middle ages, only to be wiped out as heretics by the intervention of the Roman catholic church.

So we have had wars, famines, desperation and illness for ages. Recently, the pressure was increased a notch. It started with the demolition of the World Trade Center in 2001, arranged as a perfectly staged terror event. Then we got “shock and awe” as a doctrine of war, applied to the nations of Iraq and Afghanistan. Right now we have a “war on terror” that is but a means of keeping us continually afraid … terrorised. Regular terror events are staged for the benefit of press reporting, complete with actors and dead bodies.

Our medical system suppresses real cures and instead “treats” illness from cradle to grave. Vaccines start us out into a sick life, kids are medicated in school and later as adults are drugged for “mental problems”, cancer drugs are poisons that kill the patient, suffering all the way. And of course we have wars and we have financial trouble and poverty … all things that could end tomorrow but are kept there to ensure a rich emotional harvest.

I don’t think I have to go into detail about the means that are used to keep our terror and despair alive, or to keep us sick and dying and full of pain, or to deny us a life full of joy and happiness. The evidence is all around us and much has been written about that stuff for years.

I would rather have us think about how to get out of being farmed for heavy emotions that aren’t necessary for our own survival and that fill our lives with misery and desperation.

So here is what we all can do.

I think that should make for a good start.

One Reply to “Are humans really at the top of the food chain?”